Best Freelancing Tools for the Disorganized

To those who've been at it for a minute, it seems that freelance and organization go hand-in-hand.    Even if a person is naturally organized, they often need something that tells them what to do or how to do it.  While many say that freelancing apps that can be used on a smartphone or mobile device are the best, not everyone uses such as system.

As for me, I'm still old school as I like to write things down.  I've never owned a Blackberry or anything that required me to keep up with charging schedules before realizing that the LG is a pretty awesome brand.  Oh yeah, you didn't hear that last part from me😛

Anyway, this is the organizer I grew up with, except mine was probably some fluorescent since it was the later 1980s.  It was also filled with confetti-size pieces of paper that had random guy's numbers I met on the bus and really serious ish like 'Interview at Mickey Ds for 11:00a'.  I even managed to convert my senior name cards (WTF were those for anyway?) into business cards using a word processor.  How genius was that?

So, in my mind, I was a really busy teen out of school who's always loved the idea of being organized.  Even once considered it as a career.  But then came along those Post-Its, and while it seemed like a good thing for someone who was balancing phone calls from agencies back in the day.  However, I learned that not all Post-Its, just like not all organizers were made alike.  Some could stick for days or weeks but here's my latest discovery... 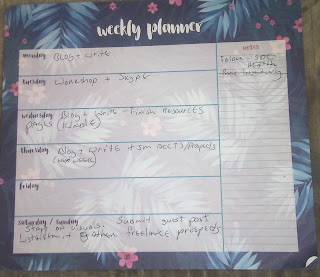 Now this little treasure right here, which costs about $9 at Office Depot, gives me everything I need without worrying about data loss, USB cables that suddenly decided to stop charging, and wondering if I need a connection to read it.  I just jot down my plans for the week, along with some important tasks that I might have neglected.  Trust me, my Kindle's To-Do List has been a Don't for more than two years now.  Don't let cool technology prevent you from reaching your freelancing goals...sometimes an oldie is more than a goodie, especially when you get paid on time!
By J.Swindell
Email ThisBlogThis!Share to TwitterShare to FacebookShare to Pinterest
Labels: cheap, communication, freelancing, goals, money